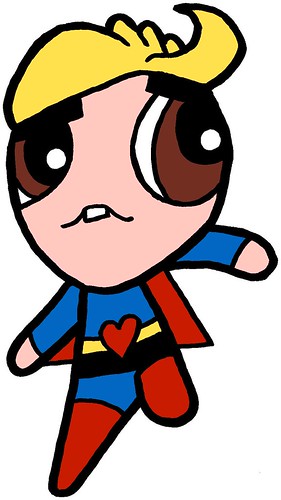 Here is my entry for the design contest for Standard Comic. It is supposed to be Justin Bieber as a PowerPuff hero. The contest closes on October 31, 2010.

You can watch a live video I made on Justin TV.

I totally forgot his character description. Here it is.

Meet Biebs. He is the shy, nerdy one. His only power is to stun people with his voice, making them completely immobile. Other than that, he is completely harmless.

He is the brother of the PowerPuff girls, made with some leftovers from Professor Utonium’s experiment that created the PowerPuff girls. Since he’s an afterthought, the gang (Blossom, Bubbles and Buttercup) ignore him completely, like he doesn’t exist, which makes him sad. When he’s sad, he starts to sing, making people around him swoon. His super special power is that he can make dirt and filth disappear, just by touching it.

So overall, he’s not as powerful as his sisters, which is another reason why they totally ignore him. However, it could also be because he’s a boy, or perhaps, since he makes rubbish go away, he is perceived by his sisters as a lowly janitor.

He tries to compensate for his lack of super-powers and recognition by wearing outfits of famous superheroes. Here I’ve drawn him in a Superman costume. But really, if Superman were as shy as Biebs, would he be the superhero he is known as? I think he wears those costumes to make him forget his shyness and imagine he is as cool and dapper as his big sisters.