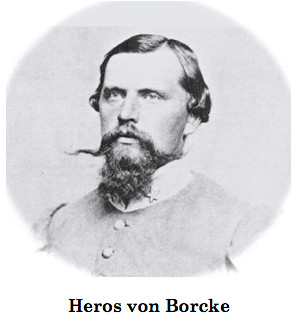 8_Gen_Lee_had_ordered
Gen. Lee had ordered Von Borcke to, as a pretext, take papers to McClellan and negotiate

11_noted the sumptuous feast being readied

17_After hearing Von Borcke’s report in his tent
After hearing Von Borcke’s report in his tent at Bunker Hill early on the morning of October 3rd – as Lincoln was also rising with Ozias Hatch to bed-check Federal troops near the Grove Farm – Gen. Lee must have concluded that a Lincoln visit presaged imminent movement by the large, rested and prepared Federal army. To confound any such advance and perhaps to yet have a pro-Confederate impact on the outcome of a rapidly approaching Congressional election for the North, Lee issued

On the morning of October 3rd, Lincoln was reviewing men of the Ninth Corp under Gen.

Lincoln was still keeping the staff in stitches with stories that morning, delaying the review by two hours, wrote Gen. Jacob Cox:

21_wrote Gen. Jacob Cox:
We were ordered to be under arms by eight o’clock, but it was more than two hours after that . . . The officers were very hilarious over some grotesque story which Mr. Lincoln had seasoned the conversations . . . The usual march in review was omitted for lack of time, the President contenting himself with riding along the lines formed in parade.

Cox continued:
I was with the party of officiers invited by McClellan to accompany the President in a ride over the route which Sumner had followed in battle. We crossed the Antietam in front of Keedysville, followed the hollows and byways to the East wood, and passed through this and the cornfields which had been the scene of Hooker’s and Mansfield’s fierce fighting. – Cox, pp. 364-365.

Awaiting Lincoln along the Hagerstown Pike were calvary units including the 8th Illinois Cavlary, the unit of Abner Hard:

24_Hard wrote:
All the troops were ordered out to be reviewed by President Lincoln and General McClellan. The ground chosen was that part of the battlefield where Generals Hooker and Sumner had fought. Our brigade was drawn up in line near the Hagerstown

Rufus Dawes of the 6th Wisconsin Volunteers, also watched from his position in line:

31_Proclamation of Emancipation
Proclamation of Emancipation upon the result of this battle. Recognizing Antietam as a victory, he had issued his preliminary paper of September 22nd, 1862, and he now visited the bloody field, where under the gracious favor of God, to whom he had appealed, we had defeated the invasion of the North, and made it possible for him to proclaim the purpose of our

33_Compared with the small figure of General McClellan, who, with jaunty air and somewhat gaudy appearance

photographed upon my memory. Compared with the small figure of General McClellan, who, with jaunty air and somewhat gaudy appearance, cantered along beside him, Mr. Lincoln seemed to tower as a giant. – Dawes p. 100.

The amiable Lincoln, who had officers in stitches laughing into the night the very night before at headquarters – with his mimickry, well-honed stories, and the frantic orchestra of odd sleight of hand and flapping elbows – was subdued from absorbing the grim realities.

(Verse used in video)
Vain man, thy fond pursuits forbear;
Repent, thine end is nigh;
Death, at the farthest, can’t be far:
O think before thou die.

Reflect, thou hast a soul to save;
Thy sins, how high they mount!
What are thy hopes beyond the grave?
How stands that dark account?

Death enters, and there’s no defense;
His time there’s none can tell;
He’ll in a moment call thee hence,
To Heav’n, or down to hell.

(Verse used in video)
Thy flesh, perhaps thy greatest care,
Shall into dust consume;
But, ah! destruction stops not there;
Sin kills beyond the tomb.

His deep recesses had a basement in the twilight beside Anne Rutledge’s grave, where Lincoln once said, “Here my heart is buried also.” This song – among the most sacred – stayed through time and helped inspire him to give his last full measure of devotion.

Lamon remembers that three-mile ride to Bakersville to the north:

38_Lamon remembers that three-mile ride
Mr. Lincoln had said to me, “Lamon, sing one of your little sad songs,” — I knew well what Mr. Lincoln meant by “the little sad songs.” The sentiment that prompted him to call for such a song had its history, and one of deep and touching interest to me. One “little sad song ” — a simple ballad entitled “Twenty Years Ago”— was, above all others, his favorite.

Many a time, in the old days of our familiar friendship on the Illinois circuit, and often at the White House when he and I were alone, have I seen him in tears while I was rendering, in my poor way, that homely melody. The late Judge David Davis, the Hon. Leonard Swett, and Judge Corydon Beckwith were equally partial to the same ballad. Often have I seen those great men overcome by the peculiar charm they seemed to find in the sentiment and melody of that simple song.

“Twenty Years Ago”
(Performed and interpreted on video by Terry Tucker)

40_I’ve wandered to the village, Tom

I’ve wandered to the village, Tom
I’ve sat beneath the tree
Upon the schoolhouse playing ground
Which sheltered you and me
But none were there to greet me, Tom
And few were left to know
That played with us upon the grass
Some twenty years ago

41_The spring that bubbled ‘neath the hill

(Verse not used)
The spring that bubbled ‘neath the hill
Close by the spreading beech
Is very low; ’twas once so high
That we could almost reach
And kneeling down to get a drink
Dear Tom, I started so
To see how much that I was changed
Since twenty years ago

42_Near by the spring, upon an elm

(Verse not used)
Near by the spring, upon an elm
You know I cut your name
Your sweetheart’s just beneath it, Tom
And you did mine the same
Some heartless wretch had peeled the bark
‘Twas dying sure but slow
Just as that one, whose name was cut
Died twenty years ago

43_My lids have long been dry, dear Tom

My lids have long been dry, dear Tom
But tears came in my eyes
I thought of her I loved so well
Those early-broken ties
I visited the old churchyard
And took some flowers to strew
Upon the graves of those we loved
Some twenty years ago

44_Some now are in the churchyard laid

Some now are in the churchyard laid
Some sleep beneath the sea
But few are left of our old class
Excepting you and me
And when our time shall come, dear Tom
And we are called to go
I hope they’ll lay us where we played
Just twenty years ago

Lincoln and his party eventually arrived at the camp site of Gen. Franklin’s Sixth Corps near Bakersville. The soldiers in review watched him closely.

47_we were sure to see him, slow-riding through camp

Always after a great battle, and especially disaster, we were sure to see him, slow-riding through camp, with outward or inward-searching eyes, questioning and answering heart. We could see the deep sadness in his face, and feel the burden on his heart, thinking of his great commission to save this people, and knowing that he could do this no otherwise than he had been doing, . . . the devotion, the sufferings and the thousand deaths, of those into whose eyes his were looking. How he shrunk from the costly sacrifice we could see; and we took him into our hearts with answering sympathy, and gave him our pity in return. – Chamberlain, pp. 73-74. (327-328).

49_after a very long, hot, and dusty day