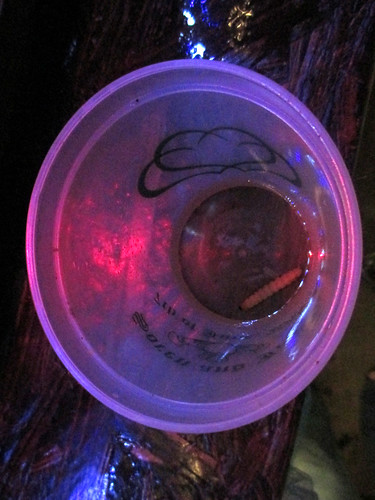 I asked for a Tequila shot, and after the naked goddess bartender served my drink, I noticed there was a worm in it! I suspected it may be a Pennsylvania forest worm, so I made the bartender show me the bottle (and took a pic). It was Monte Alban brand tequila. It stated on the label that it came “with agave worm”. So the worm was real.

Therefore, this was a rare honor & opportunity bestowed upon me, and I would be foolish not to truck on through.

MAN that thing was chewy! I thought it would be chewy like a jelly bean, but it was chewy like fried calamari! What a trip!

… Read my blog at ClintJCL at wordpress.com

– Played with propane bubbles (cover hand, stick in fire, watch self burn) with zero regard for my safety or even knowing what they were (“other people aren’t dying when they do this, so i’ll do this, whatever this is. no, i won’t ask anybody any questions about it or learn anything safety-related”)

– Learned to always great one specific person with “Hi, Clint!” (Her name is not Clint. This is how she prefers greetings.)

Saw a truck covered in fire driving down the mountain like nothing was going on. Overheard: “Are you seeing that? Is that real?”