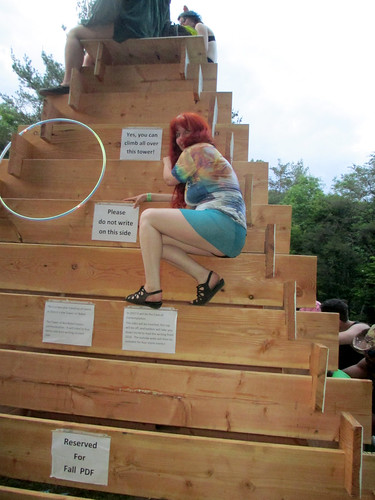 Clint convinced Carolyn to climb to the middle of the ziggurat. Look at her holding on for dear life.

The ziggurat was a huge art project that is traveling from burn-to-burn for people to write on, and then it’s eventually going to be burned as an effigy.

We actually made it to the burn this year! We didn’t sleep through it.

– Played with propane bubbles (cover hand, stick in fire, watch self burn) with zero regard for my safety or even knowing what they were (“other people aren’t dying when they do this, so i’ll do this, whatever this is. no, i won’t ask anybody any questions about it or learn anything safety-related”)

– Learned to always great one specific person with “Hi, Clint!” (Her name is not Clint. This is how she prefers greetings.)

Saw a truck covered in fire driving down the mountain like nothing was going on. Overheard: “Are you seeing that? Is that real?”